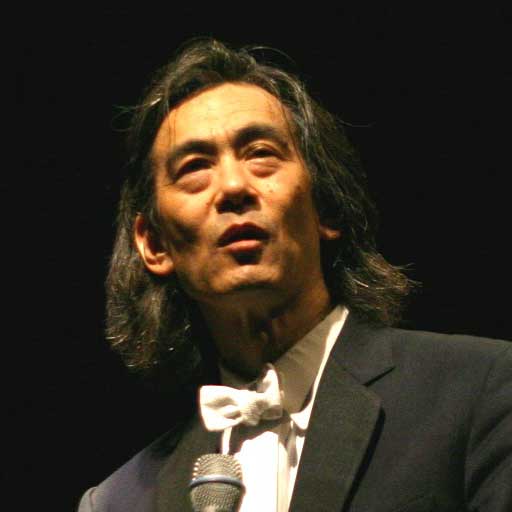 Kent Nagano is renowned for interpretations of clarity, elegance and intelligence. He is equally at home in music of the classical, romantic and contemporary eras, introducing concert and opera audiences throughout the world to new and rediscovered music and offering fresh insights into established repertoire. He has been Music Director of the Orchestre symphonique de Montréal (OSM) since September 2006. In September 2013, he became Principal Guest Conductor of the Gothenburg Symphony Orchestra. In September 2015, he took up the position of General Music Director of the Hamburg State Opera and Chief Conductor of the Hamburg Philharmonic State Orchestra, and since 2006 he has been appointed Honorary Conductor of the Deutsches Symphonie-Orchester Berlin.

In July 2018, Kent Nagano conducted Krzysztof Penderecki’s St. Luke Passion with the OSM on the occasion of the Salzburg Festival opening concert. In August 2018 he stood at the rostrum of Vienna Philharmonic, conducting the new production of Hans Werner Henze’s The Bassarids at the Salzburg Festival.

Kent Nagano starts season 2018/19 with an OSM tour into arctic Quebec. In January 2019 he will then go on tour through Spain with the Hamburg Philharmonic State Orchestra. At the Hamburg State Opera Kent Nagano conducts the premieres of Schumann’s Scenes from Goethe’s Faust and George Benjamin’s Lessons in Love and Violence as well as performances of the entire Ring by Wagner in autumn 2018.

Highlights of Kent Nagano’s previous seasons in Hamburg were the premiere of Berlioz‘ Les Troyens, the world premiere of Hosokawa’s Stilles Meer, Messiaen’s Turangalîla with the Hamburg Ballett and John Neumeier, the premieres of Wagner’s Parsifal and Beethoven’s Fidelio, the „Philharmonische Akademie“ – a project in the tradition of musical academies of the 18th/19th century –, as well as the South America Tour with the Hamburg Philharmonic State Orchestra, the premieres of Berg’s Lulu and Strauss’ Frau ohne Schatten and the world premiere of Jörg Widmann’s oratorio ARCHE – composed on the occasion of the inauguration of the Elbphilharmonie in January 2017. The live recording of this concert will be released on CD by ECM in autumn 2018. Kent Nagano will go on a Europe tour with the OSM in March 2019, with concerts in Berlin, Vienna, Munich, etc.

A milestone in Kent Nagano’s collaboration with the (OSM) was the inauguration of the orchestra’s new concert hall La Maison Symphonique in September 2011. In October 2016, he conducted the world premier of José Evangelista’s Accelerando – a commission by the OSM on the occasion of the 50th anniversary of Montréal’s metro. In November of the same year he conducted a semi-staged production of the Matthäus-Passion. Further highlights with the orchestra include the complete cycles of Beethoven and Mahler symphonies, Schoenberg’s Gurrelieder, concert versions of Wagner’s Tannhäuser, Tristan und Isolde, Das Rheingold, Honegger’s Jeanne d’Arc au Bûcher, Messiaen’s Saint François d’Assise, and concert series featuring the works of Dutilleux (2010-11) and Boulez (2011-12).  Nagano has taken the orchestra on a coast-to-coast tour of Canada and also to tours to Japan, South Korea, Europe and South America. Their last tour was in spring 2016 through the US, with stops in Washington, Boston and New York. Their recordings together include Mahler’s Orchestral Songs with Christian Gerhaher, Beethoven’s Piano Concertos Nos. 4 & 5 and a complete recording of all the Symphonies by Beethoven of which the album “Ideals of the French Revolution” with Symphony No. 5 won a Juno award. In March 2015 Kent Nagano conducted the North American Premiere of L’Aiglon, a rare opera of Honegger and Ibert. This production was recorded and released by Decca. Danse Macabre followed as second production with Decca, with works by Dukas, Dvo?ák, Mussorgsky, Balakirev, Saint-Saens and Ives in October 2016. In June 2018, A quiet place by Leonard Bernstein were released also with Decca as third mutual production.

At the Bayerische Staatsoper, where he was General Music Director from 2006 to 2013, Kent Nagano commissioned new operas such as Babylon by Jörg Widmann, Das Gehege by Wolfgang Rihm and Alice in Wonderland by Unsuk Chin. New productions included Mussorgsky’s Boris Godunov and Khovanshchina, Idomeneo, Eugene Onegin, Ariadne auf Naxos and Die Schweigsame Frau, Les Dialogues des Carmélites, St François d’Assise, Wozzeck, George Benjamin’s Written on Skin and Der Ring des Nibelungen.  With the Bayerisches Staatsorchester Nagano has toured throughout Europe and in Japan and together they have recorded Bruckner Symphonies No. 4, 7 and 8. In January 2014, Kent Nagano returned to the Bayerische Staatsoper to conduct a revival of Widmann’s Babylon.

A very important period in Nagano’s career was his time as Artistic Director and Chief Conductor of the Deutsches Symphonie-Orchester Berlin, from 2000-2006. He performed Schönberg’s Moses und Aron with the orchestra (in collaboration with Los Angeles Opera), and took them to the Salzburg Festival to perform both Zemlinsky’s Der König Kandaules and Schreker’s Die Gezeichneten, as well as to the Festspielhaus Baden-Baden with Parsifal and Lohengrin in productions by Nikolaus Lehnhoff.  Recordings with the Deutsches Symphonie-Orchester Berlin for Harmonia Mundi include repertoire as diverse as Bernstein’s Mass, Bruckner’s Symphonies Nos. 3 & 6, Beethoven’s Christus am Ölberge, Wolf Lieder, Mahler’s Symphony No. 8 and Schönberg’s Die Jakobsleiter and Friede auf Erden, as well as Brahms’s Symphony No. 4 and Schönberg’s Variationen für Orchester Op. 31.  In June 2006, at the end of his tenure with the orchestra, Kent Nagano was given the title Honorary Conductor by members of the orchestra, only the second recipient of this honour in their 60-year history. To this day he has a close friendship to the orchestra.

Born in California, Nagano maintains close connections with his home state and was Music Director of the Berkeley Symphony Orchestra from 1978-2008.  His early professional years were spent in Boston, working in the opera house and as assistant conductor to Seiji Ozawa at the Boston Symphony Orchestra.  He played a key role in the world premiere of Messiaen’s opera Saint François d’Assise at the request of the composer, who became a mentor and bequeathed his piano to the conductor.  Nagano’s success in America led to European appointments: Music Director of Opéra National de Lyon (1988-1998) and Music Director of the Hallé Orchestra (1991-2000).

Since May 2018, Kent Nagano is honorary doctorate of San Francisco State University.