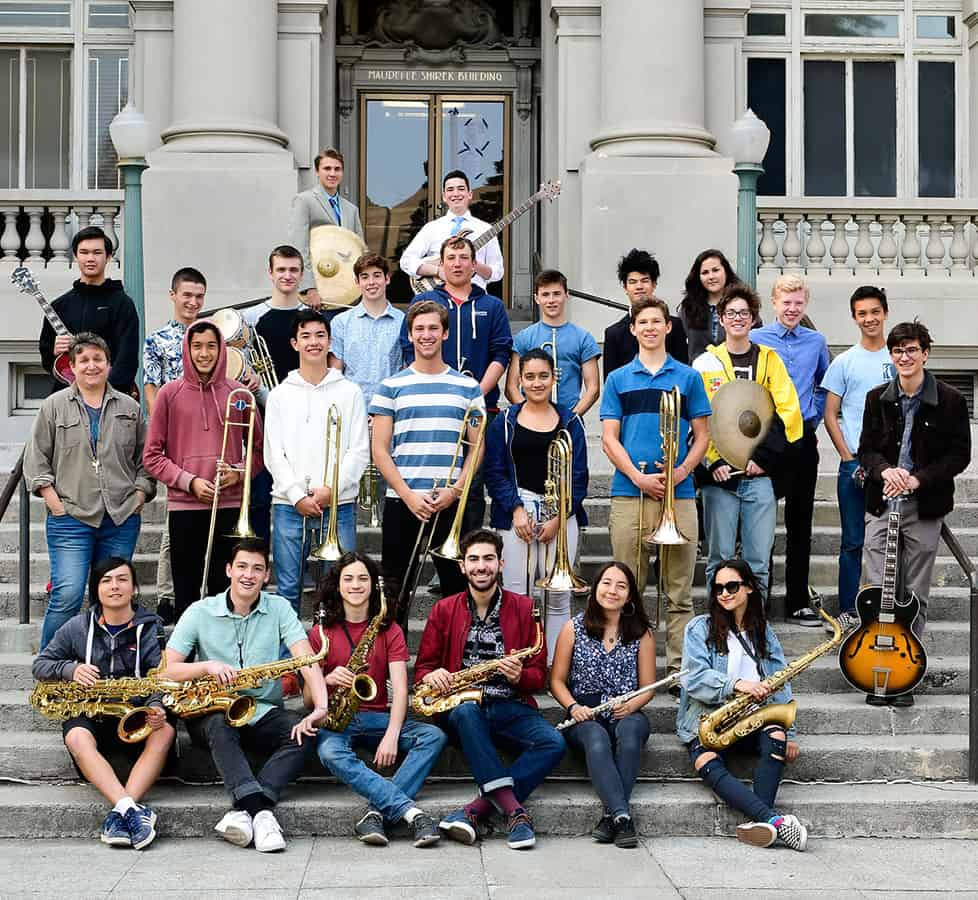 Dr. Herb Wong brought jazz to the Berkeley elementary and middle schools. He hired professional jazz musicians to teach Berkeley students. Dick Whitington and Phil Hardymon were two of those teachers. When Phil Hardymon became the band director at Berkeley High School in 1975, he established the jazz band as the culmination for students who had gained the basics in their elementary and middle schools. Under Hardymon’s leadership, the band began winning state-wide jazz competitions and often earned a spot at the Monterey Jazz Festival. Many Berkeley High School Jazz students went on to become professional musicians— Peter Apfelbaum, Benny Green, Steven Bernstein to name a few. With Phil Hardymon, the Berkeley Jazz Program thus developed into a national model of instrumental education.

Charles Hamilton took over leadership of the Jazz Ensemble in 1981. The band continued to thrive and develop some of the best musicians in the jazz world, including Joshua Redman, Ambrose Akinmusire, and Dave Ellis.

The Ensemble has performed in venues large and small. In 1997, they performed by invitation at the Montreux and North Sea Jazz Festivals. In the summer of 1999, the Ensemble toured Japan and began the 1999-2000 school year with an appearance at the Monterey Jazz Festival. Over the many years, numerous BHSJ students have won individual and Jazz Combo awards at Jazz festivals and have been awarded music scholarships to the best music schools in the nation. In both 2012 and 2013, the top BHS Jazz Combos won first place at the Next Generation Jazz Festival in Monterey earning them a slot at the Monterey Jazz Festival. In 2012 and in 2013, two different top BHS Jazz Combos were named High School Combo of the Year by Downbeat Magazine. In 2015 the top BHS Jazz Combo was invited to participate in the Mingus Jazz Festival in New York City where they won the top combo award.

In 2011, Sarah Cline became the Director of the Berkeley High Jazz Program, beginning a new era in the history of jazz at Berkeley High School.

Berkeley High School Jazz Ensemble is led by Sarah Cline who is in her ninth year as Jazz Director at Berkeley High School, a premier jazz program known nationally and internationally as an incubator of talent and a citadel of swing. Her students regularly represent at high level festivals and get into top flight college music programs. During her time at Berkeley High, she has led four tours to Cuba, collaborating with La Escuela Nacional de la Musica in Havana. Sarah is the founder of JazzGirls Day, an event that now is spreading to communities across the US that encourages young women to see a place for themselves in the world of jazz. In addition to her teaching duties, Sarah is an in-demand professional trombonist in the San Francisco Bay Area in both jazz and salsa bands. She has presented at the American Educational Research Association Conference, the Jazz Education Network Conference, and the California All-State Music Education Conference.